I served this bread at a dinner party the other night and twice got asked "where did you get the bread". I think that is pretty good for homemade bread!

This is quite an unusual method but just normal ingredients and you really don't knead the bread at all. You quickly mix together a really wet dough, leave it to rise for 12 - 18 hours, then reshape, leave for two hours then bake in a preheated cast iron 'dutch oven' with lid on. This effectively steam bakes the loaf, imitating a professional steam injected bakers oven, enabling you to get a really crisp crust. There is also a quick version, which uses much more yeast and doesn't developed the same flavour, but is ready to bake in 4 1/2 hours, I make this just as much and it is great.

The recipe by Jim Lahey of Sullivan Street Bakery was printed in the New York Times in 2006 with some more fine-tuning suggestions here with a good explanation here and then there was a follow up article two years later which gives a recipe for a whole-wheat version and a quick version. Overwhelmed yet? The recipe was considered fairly revolutionary to home bread making and has developed quite a following - just do a google search!

Here is the recipe. I have used both plain and bread flour with good results and bake in a 24cm Le Creuset pot, you could use smaller, but not larger as you would end up with a very flat loaf.

The quick version is written in [brackets]

1. In a large bowl combine flour, yeast and salt. Add water, and stir until blended; dough will be shaggy and sticky. Cover bowl with plastic wrap. Let dough rest at least 12 hours [4 hours], preferably about 18, at warm room temperature, about 21 degrees C (but it works in winter at my house which isnt 21C!).

2. Dough is ready when its surface is dotted with bubbles. Smear olive oil on a work surface and place dough on it; fold it over on itself once or twice. (Now you are supposed to cover loosely with plastic wrap and let rest about 15 minutes, but I generally skip this step).

3. Using just enough flour or oil to keep dough from sticking to work surface or to your fingers, gently and quickly shape dough into a ball. Generously coat a square of baking paper with flour, semolina (my choice), wheat bran or cornmeal; put dough seam side down on paper and dust with more flour. Cover (I use a large plastic cake container inverted over) and let rise for about 2 hours [30 minutes]. When it is ready, dough will be more than double in size and will not readily spring back when poked with a finger.

4. At least a half-hour before dough is ready, heat oven to 225 degrees C. Put a 5.5 to 7.5 L heavy covered pot (cast iron, enamel, Pyrex or ceramic) in oven as it heats, it is quicker to put the lid and pot in separately to heat. When dough is ready, carefully remove pot from oven. Slide your hand under baking paper and turn dough over into pot, seam side up; it may look like a mess, but that is O.K. Shake pan once or twice if dough is unevenly distributed; it will straighten out as it bakes. Cover with lid and bake 30 minutes, then remove lid and bake another 15 to 20 minutes, until loaf is beautifully browned. Cool on a rack. 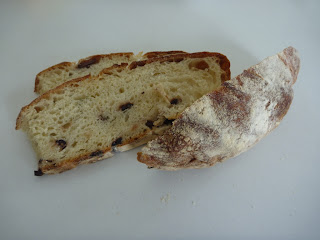 Variations
Olive and Rosemary bread - fold through 1/2 C chopped olives and 1 tbsp finely chopped rosemary leaves after the first rise.
Other suggestions - seeds, onion, cheese, bacon, walnuts, raisins or whatever other traditional bread flavourings mixed through after the dough is mixed or after the first rise.
Posted by Shara at 9:53 PM