I spent all Saturday sewing tutus, as you do! So I wanted a quick dinner for when the rest of the family came back after leaving me alone for the afternoon. So the chook  in the freezer got turned in to chinese poached chicken from this Womens Day Slow Cooker Monday article and originally from the book "Not Your Mother's Slow Cooker Recipe Book". I followed the recipe but added more liquid as I have a large 6.5L slow cooker and was only cooking a small chicken. I put it on at lunch time on high to get it going then low, it was probably on for 3-4 hours. The recipe states it needs 7 hours on low - this is a long time and hers is falling apart after that long, so I would do less.

I served it on noodles - 2 minute noodles with frozen peas and corn for the kids and stir-fried egg noodles with vegetables for us. Ava asked for more and more chicken - I love an appreciative eater.

The flavour was delicious! The dark meat was juicy and succulent, and the breast only slightly dry which I would expect cooking it this way, but much improved with lots of the broth poured over. I strained the broth off and froze it to repeat or use in soup.

Two days later the leftovers got used up in rice paper rolls, my 4 year olds favourite. 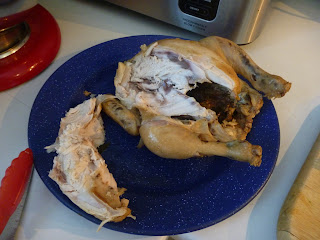 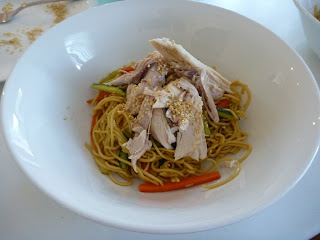 Rice Paper Rolls
I haven't given proportions here as you can make it up as you go along. The ingredients below are what I put in it for the kids. For us I also add coriander, capsicum, spring onions and I add it in sticks rather than chopped up.

Combine chicken, cucumber, carrot, noodles and hoisin sauce to taste.
Soak wrappers in warm but not boiling water. Wrap filling in wrapper. Only do this shortly before you want to eat them.
Cover with a wet paper towel until ready to eat. Do no refridgerate or they will go hard.
Posted by Shara at 8:56 PM