I like Nigella Lawson's Buttermilk Birthday Cake recipe from her book How To Be A Domestic Goddess and use it for all my birthday cakes. It is moist and delicious and even tastes great the next day (and for many days after that) which isn't the case for lots of cakes, and it holds it shape and can be cut and piled into any shape you need. 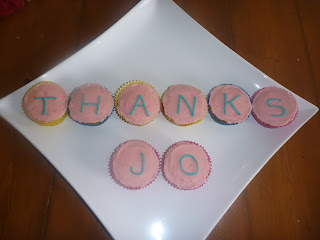 I decided to use it for a batch of cupcakes recently as I was baking them the night before. The next morning I chopped the tops off each cupcake (I wonder if they would be flatter if I used less baking powder?), covered in a smooth coating of buttercream icing then piped letters on each one. 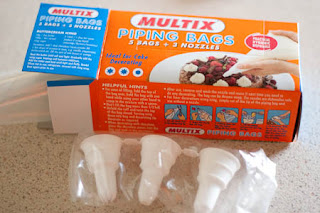 I have discovered Multix Piping Bags, available from the supermarket, they are only a few dollars for 3 bags and nozzles. I have found the nozzles too big for fine piping, but you can cut the bag to any size you like, so I just cut a really small hole. You can wash and reuse or just throw away.

Nigella's Buttermilk Birthday Cake
"This cake is ideal for any birthday cake you want to make in a special mould as it holds its shape brilliantly. But you don’t have to wait for someone’s birthday - it’s a great recipe to cook with the kids at any time …"
serves 10

Sift the flour, baking powder, bicarbonate and salt together. Mix the buttermilk (or yogurt mixture) and lemon zest.

Cream the butter and sugar together. Beat in the eggs one at a time, adding a little of the flour with the last one.

Gradually add the rest of the flour with the buttermilk, one after the other, until thoroughly mixed.

Pour into the tin and bake for about 30 minutes or until well risen and pale golden brown. Loosen the sides of the cake with a round-bladed knife and turn out onto a wire rack to cool.

Buttercream Icing
This makes lots of icing, more than enough for one cake or batch of cupcakes, but if you want to make lots of colours it is worth having plenty!

If making all one colour, add food colouring to the mixer, if you want lots of colours, split into separate bowls and stir in the colouring by hand.

Swiss Buttercream Icing
This is a great icing that is smooth, fluffy, pipes really well, and isn't as sweet or gritty as normal buttercream icing. I have used it to ice the few wedding cakes I have made with great success.

enough for a 23cm cake plus filling

Whisk egg whites and sugar together in a big heatproof bowl over a pot of simmering water. Whisk occasionally until you can’t feel the sugar granules when you rub the mixture between your fingers.

Transfer mixture into the mixer and whip until it turns white and about doubles in size. (When you transfer to the mixer, make sure you wipe the condensation off the bottom of the bowl so that no water gets into the egg whites. This can keep them from whipping up properly.)

Add the vanilla. Finally, add the butter 100g at a time and whip, whip, whip. Do not have a panic attack when this takes a while to come together,  a large batch may take up to 15 minutes.
Posted by Shara at 10:57 PM